Thank you for subscribing! Keep your eyes out for exclusive content, offers & discounts!

Close Continue
The store will not work correctly in the case when cookies are disabled.
Australia Wide Delivery for $9.95
We Deliver WORLDWIDE!
Currency
AUD - Australian Dollar
Be the first to review this product 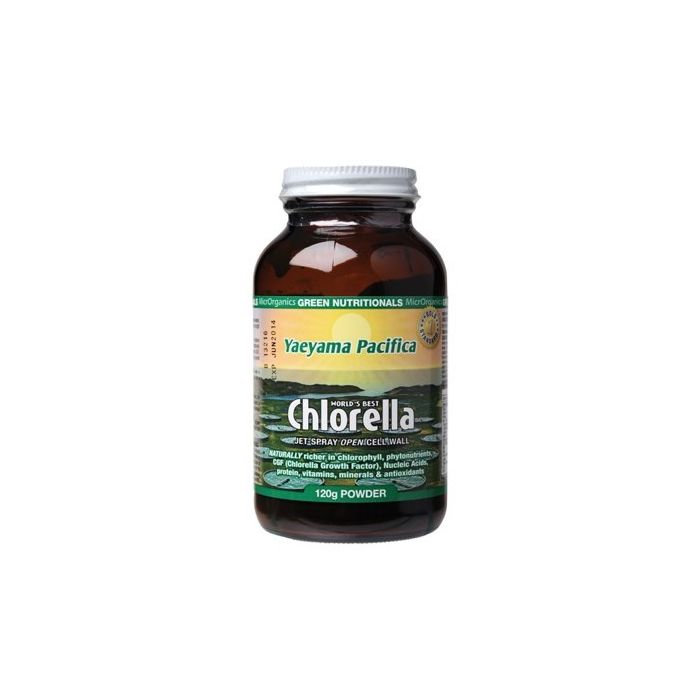 Skip to the beginning of the images gallery
Description

Chlorella is an ancient single celled freshwater micro algae containing chlorophyll and many other useful phytonutrients. Thought to have had its genesis 2 billion years ago, chlorella is found naturally in freshwater rivers and waterways, but is now grown by aquaculture for human consumption.

Chlorella is unicellular which means each cell is self sufficient allowing it to perform all its functions inside itself. Each cell measures only 2.8 microns ( 1 micron = 1/1000th of a mm) about the size of a human red blood cell. Chlorella is so small that 1 litre of chlorella in a thin suspension contains over 20 billion cells.

Together with other photosynthetic micro-algae, Chlorella played an important role in converting the carbon dioxide rich atmoshere to oxygen through the process of photosynthesis. Micro-algae are largely responsible for converting the Earth's atmospheres 0.1% Oxygen, content to the 20% mix we have today, allowing all current organisms to thrive. 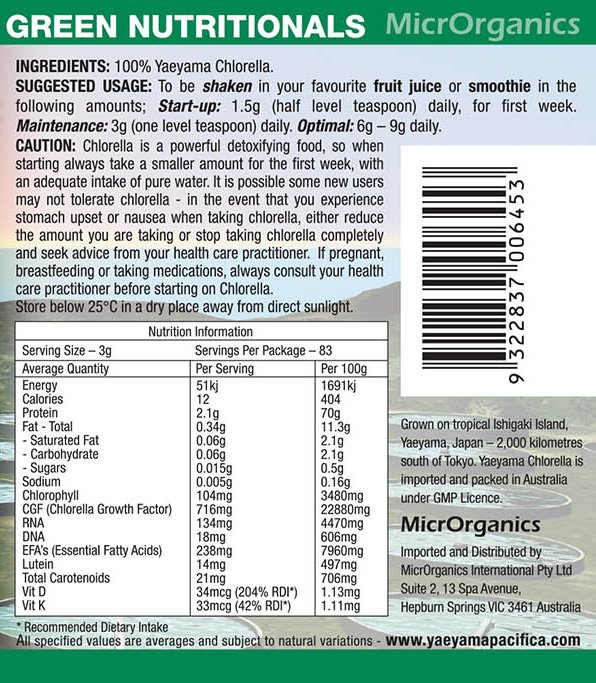 Chlorella is a powerful detoxifying food, so when starting always take a smaller amount for the first week, with an adequate intake of pure water. It is possible some new users may not tolerate chlorella - in the event that you experience stomach upset or nausea when taking chlorella, either reduce the amount you are taking or stop taking chlorella completely and seek advice from your health care practitioner.  If pregnant, breastfeeding or taking medications, always consult your health care practitioner before starting on Chlorella.

There are some people who cannot tolerate chlorella and experience a strong allergic vomiting reaction after consuming it. This is extremely unusual and only affects a very small percentage of people. For this reason we always suggest starting off with a small serve and being cautious on day one and during the first week or so.

If you have this sort of strong reaction, stop taking the product, it's not for you. If the vomiting is intense and prolonged, seek medical help to avoid dehydration.

Suggested Usage: To be shaken in your favouite fruit juice or smoothie in followinh amounts: Start up" 1.5g (half level teaspoon) daily, for first week.